Coffee & Catch Up: With James Doyle 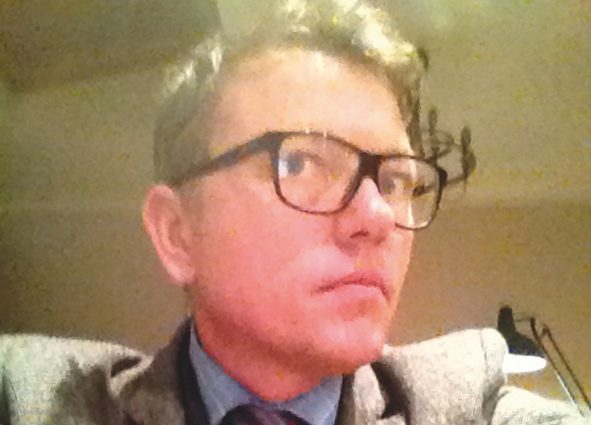 James is an award-winning children’s author, teacher and part-time superhero. He is married to Oonagh and they have three grown-up children, Conall (20), Erin (19) and Cara (18), but are expecting a new arrival this summer in the form of a miniature Schnauzer who they plan to name ‘Rainbow’.

Q) What achievement as a teacher and author are you most proud of?

Phew! Where to start? As a teacher, I get a great buzz out of working with my students every day. I am proud that they feel they can come to me and ask for my help, but I don’t really see a distinction between me as a teacher and me as an author. My writing simply allows me to work with a wider audience. You’re still helping kids learn and grow, except for the fact that they could live in London or New York or Beijing. That said, if I were to pinpoint some achievements that I am proud of then I guess winning the International Reading Award in 2013 was a great milestone. It meant that I became the only person from Northern Ireland to ever win the award, but I am a great believer in measuring success against the best. When the editor of Scoop, Sarah Odedina, asked me to write for them last summer, I knew I was in rarified territory. I’ll never forget my wife, Oonagh saying ‘Have you Googled Sarah Odedina?’ To which I replied ‘No’. We later found out that she had worked as JK Rowling’s editor on all the Harry Potters. It was surreal really. Now I am published each month alongside the likes of Michael Morpurgo, Neil Gaiman and Jacqueline Wilson. That would have to be what I am most proud of so far.

Q) As a regular contributor to Scoop, which topics do you most enjoy writing about for children?

I love writing about wacky, obscure non-fiction such as Milky Seas, Exploding lakes, The Hobbits of Indonesia, The Harry Potter Dinosaur and so on (all are real by the way…I am serious!) but I also enjoy writing about great people. In a recent issue, which was published on International Women’s Day, I had to write about an inspirational woman and I chose Ruth Law. Ruth was born in the US in 1887 and always dreamed of being a pilot – which was laughed at at the time. Ruth went on to break numerous flying records, hold daredevil flying shows and became the first American woman in uniform. A truly remarkable human being and an inspiration to all girls out there that you can do whatever you set your mind to.

Q) You graduated with a first-class honours degree in Environmental Sciences from Queen’s University, what environmental laws would you make if you could?

The ignorance of environmental issues really irks me. If you mention anything about the topic you are seen as either a bit mad or some sort of hippy tree hugger. The reality is that there are two things in this world: Us – humans, and the planet. We rely on it for everything…our food…our water…the air we breathe and our future. Let’s take a little more care. However, if I were to highlight one thing, it would be the whole current debate around plastics. The Pacific, our largest ocean, is rapidly being renamed ‘The Plastic Ocean’. If I could, I’d ban them all. We are intelligent enough and creative enough to build a new material that simply breaks down when we throw it away.

Q) ‘A Young Scientist’s guide to Defying Disasters with Skill and Daring’ won a middle grade fiction award from The International Reading Association, what is your favourite daring experiment and what do you love about teaching science to kids?

The best experiment is the classic Coke and Mentos eruption. If you get it just right it can reach around 12-15 feet – but be warned! Do this experiment outside or you will have to deal with a baddie called ‘Angry Mum’ and trust me, even I don’t have the superpowers to defeat her!

I am actually a Geography teacher during daylight hours, but you rightly point to my degree in Environmental Sciences which gave me a grounding in both science and geography. As a kid I loved learning new things and most kids I meet do. They have a thirst for knowledge and ask the silliest questions but it’s all great fun. I also like making things explode – Kaboom!

Q) If you were a superhero what would your special powers be?

I would be ‘Happiness Man’ – which is a very corny title but please bear with me. I would have the power to alleviate all of the stress, anxiety and self-esteem issues that young people feel today. I see it on the increase in my classroom, and classrooms everywhere, and it is something that needs addressed. Every young person is a perfect, unique individual and they need to be given the right to be happy to have the best possible life they can.

Q) What is your next big adventure?

Where to start? The Superhero Handbookis to be translated into numerous foreign languages, as is my new book out later this year, but the project I am most excited about is still in its infancy. It will be my first picture book about a boy who goes on a brilliant adventure. Sorry, I’m going to have to leave it there – a team of super villains are trying to blow up the moon. I need to stop them. Speak soon, be good!

James’ tenth book ‘Why can’t I feel the earth spinning?’ published by Thames & Hudson launches later this year in the UK and US.