Our magnificent landscapes in Northern Ireland have given birth to incredible stories, tales which have entertained, enthralled and even frightened listeners for generations. These ancient and mysterious landscapes inspired our ancestors to believe in a magical other world, a world home to many weird and wonderful mythical creatures throughout the centuries. If they are to be believed, this was a land of giants… and also a land of dragons.

Our most famous dragon of all was Lig-na-Paiste a serpent who became a dragon. At Banagher Glen, near Dungiven, lies a deep pond near to the source of the river. It was within this pond that the legendary monster was said to reside.

This ancient and ferocious beast would rest at the bottom of the deep cove, far from human gaze. As a consequence, when Saint Patrick drove all the serpents out of Ireland, Lig-na-Paiste was hidden from sight and saved from banishment. It was here he would stay until news of the death of Saint Patrick reached him. Only then did he dare rise from the depths in fury, taking his vengeance and ravaging and burning towns and villages.

The local people were terrified and searched the land for someone who would come to their aid. Their saviour came in the form of another holy man, Saint Murrough.

Saint Murrough sent word to the townspeople that he would assist them in their hour of need. For nine days he prayed for guidance, then on the ninth day he set off for the monster’s lair. On the way, he found three red rods of reeds which he gathered to place on the creature’s back.

As Saint Murrough approached the dragon’s lair, Lig-na-Paiste swam towards him. In his arrogance, he assumed this man was a sacrifice sent to appease him. Saint Murrough remained calm, and asked the beast if he could place the three rods across his back as a mark of respect and as part of an ancient sacrificial ritual. 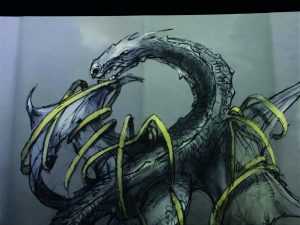 The dragon lowered his great head and allowed Saint Murrough to climb on his back lay down the rods. Scrambling down he prayed to God as he had never prayed before. Suddenly the mighty dragon screamed in anger as miraculously the rods began to grow, covering him in bindings stronger than steel. The evil creature flew into the air, struggling to break his bonds and crying out that he had been tricked, but the rods only tightened stronger, stopping him from releasing his deathly fiery breath and casting him down. He vanished underneath the water to the bottom of Lough Foyle where he is said to remain to this day.

And so it came to pass. And if you speak to the local people who live there, they will tell you that the unusual tides and currents of the Foyle, and the odd disturbances which can sometimes occur near the Lough, are the stirrings of the great beast – trapped there for centuries until the Day of Judgement.

This tale of a holy man battling his wits against an ancient fire-breathing monster is just one of the many myths waiting to be discovered in ‘Land of Legends’ from June 1 until September 1 and is free with general admission to W5. Visit w5online.co.uk to book.