Despite the constant warnings from parents, teachers, charities and the police about staying safe when using the Internet, this summer a survey of 2,000 children revealed that almost a third of children aged eight to 13 have given out personal details, such as what school they go to, their email address and phone number – even their home address – to people they’ve met online. Ni4kids asks Professor of Cyber Security at Ulster University, Kevin Curran and Head of Safeguarding in Communities for the NSPCC, Margaret Gallagher for their expert advice on what parents need to know –and do –to keep our kids as safe in a virtual world as we do in the real one…

The survey, commissioned by O2 on behalf of the NSPCC, showed that parents are still much more likely to talk to their children about wearing a seatbelt (82%) or the importance of saying no when asked to do something they are uncomfortable with (81%), compared to checking who their kids are talking to online (65%). Both O2 and the NSPCC recognise that keeping your child safe online can feel overwhelming for parents and carers and Professor Curran agrees that it’s definitely not as straightforward a task as we would hope explaining, “Much of the world’s information is now online. In tandem, all the worlds entertainment seems to be moving to the digital realm (e.g. games, YouTube, Netflix). There are downsides however. Take social media, a wonderful tool to help young people feel connected, the downside however is that it can amplify feelings of inadequacy among young people who cannot as easily discern that their friends do not live perfect lives. They lack the developed skills of adults to understand that those postings of others – are simply their best side.

“There is also a dark web. There is no need to further discuss that side of the Internet but we do have to safeguard children from being exposed to explicit images and postings and downright filth. Our responsibilities as guardians are to help them remain young and innocent until the appropriate time to move into adulthood. Unfortunately, the introduction of computers and phones hurries this process along. We all have a responsibility to not treat computers as the modern-day playground that we can ‘dump’ children into. How many parents would drive to a spot in a city and dump their children there unsupervised?  Of course, no one would – so we have to also begin to think of computers and the internet as an unsupervised playground.”

“How many parents would drive to a spot in a city and dump their children there unsupervised?  We have to begin to think of computers and the internet as an unsupervised playground.”

But what, in his opinion are the biggest risks? Professor Curran responds: “Access to disturbing content, cyber bullying and overall addiction. Young people who spend too much time online risk losing out on discovering the real world, in addition to facing increased difficulties when interacting with people in everyday life. In the future, it is possible that this generation will know the correct emoji for every situation, yet not know how to display the correct facial emotions.

“Social media can expose young people to hate speech, terror recruitment videos and sexual images. Companies such as Facebook, Twitter and Google are facing more pressure to tackle abuse and extremism on their platforms, but they have a long way to go. They have the resources to address the issue but unfortunately profits seem to take precedence for now. Excessive social media use is a problem. Yes, some apps such as Instagram are starting to remove the addictive aspects such as likes and follower count but other addictive features remain.

“Unfortunately, some of the most popular apps among young people are ones which can I would urge parents to restrict for children. These include YouTube and Instagram. Recently, YouTube was fined because it acted dishonestly. It was supposed to only allow people above the age of 13 to access content on the site yet when it was targeted advertisers, it boldly claimed that it had viewing data on people as young as six years of age. This clearly showed that they were conscious that young kids were accessing content and they were exploiting this for monetary value. Snapchat in some ways is a parent’s worst nightmare as monitoring of messages remains impractical unless young people choose to save them. This app allows ephemeral communications thus preventing monitoring by a parent. There is also a worry with apps such as Snapchat which could allow a young person’s location to be shared in real time.

“While not yet ‘proven’ some recent research had pointed to an association between screen-based activities and negative effects such as an increased risk of anxiety and depression. Perhaps one of the stronger evidence-based studies published in 2017 in the journal Clinical Psychological Science, found that children who used their smartphones for three hours or more a day were one-third more likely to feel hopeless rising to nearly half of those who used such devices for five or more hours a day. This was based on a study of more than half a million American adolescents over five years. In essence, just using social media on a daily was linked with a 13 per cent higher incidence of depressive symptoms.

“Recently, the UK’s four chief medical officers said that (1) Mobile phones should be banned from the dinner table and bedtimes as part of a healthy approach to devices. (2) Children should take a break from screen-based activities every two hours and (3) the tech industry must do more to keep children safe. This is pragmatic advice. Of course, we do hope that the benefits outweigh the negatives, and tools do exist to monitor a child’s activity online and they should be installed and used. Family filters on Internet connections are now a standard, but many choose not to turn them on.”

Scary stuff indeed, so we’ve been warned of the dangers but without going to the drastic step of completely pulling the plug, what can we do to sleep easy at night knowing we’ve done all we can to protect our kids? 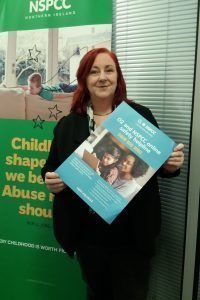 Over to Margaret who talks about the subject of online safety daily for the NSPCC, and knows how important it is for parents to have conversations with their children as early as possible. She says, “Parents have been talking to their children for generations about keeping safe in their communities, but when it comes to online safety discussions we know they aren’t as confident. Our research has shown that for one fifth of parents, their biggest worry about what their kids are doing online is that they won’t talk to them if they see something that worries and upsets them, yet only one in four parents surveyed have regular conversations with their children about it.

“It can be difficult as a parent to know where to start with online safety. Our children are growing up ‘digital natives’, often knowing more about the online world they are engaging in than we do. At the NSPCC, we are trying to make things as easy as possible, using basic languages and principles, so parents can start these conversations early and continue them as their children grow and evolve in their knowledge online.

“Our children are growing up ‘digital natives’, often knowing more about the online world they are engaging in than we do.”

“Children now view online life the same as ‘real’ life – so take an interest in what they are doing and why they are enjoying it. Explore what your child is doing online together, and talk to them about examples of inappropriate content online, for example, violent or sexual content, or anything which promotes risky behaviours. The key is to keep the conversations short, frequent and informal. Doing this will mean that it is much more likely your children will come to you if they see something they shouldn’t.”

Margaret continues, “Agreeing to family rules and boundaries together can ensure your children feel part of the process. Talk to them about what sites they think are appropriate for their age and go from there. Also, be prepared for them to mention sites that they have heard of or their friends are on that you don’t believe are appropriate for their age. Be open with them so you can agree why, as their parent, you are making that choice for your family. The NSPCC’s NET Aware online tool can also help you keep up to date with the latest apps and games, and the O2 and NSPCC’s Parents vs Kids quiz can be a fun way to test your online knowledge together. This, along with managing the technology your family use with parental controls will mean that your you can lower the online risks and ensure your children are seeing age-appropriate content online.

“It’s also important to keep an eye on their online behaviour; if they become withdrawn, upset or are reluctant to talk about what they are doing or who they are talking to, use that as an opportunity to have an additional chat. Reassure them that you won’t be angry about what they tell you, but that it is very important to keep them safe and happy online. Most importantly, keep coming back to your TEAM talks and family rules as the months and years go on. As you learn more about online safety, share your knowledge with your kids and other adults in the family. These conversations don’t need to be a one off, and keeping them going will ensure your children feel comfortable with talking to you about their online world, hopefully keeping them safe for years to come.”

The NSPCC ‘TEAM’ framework is also a great resource. It involves;

Listen to the podcast of this Ni4kids interview on ‘Keeping Kids Safe Online’ as part of the WeareUU podcast series from next month on the Ulster University website ulster.ac.uk

Net Aware is available at nspcc.org.uk/netaware. Parents can access free online safety advice at 02 shops across Northern Ireland, from a specially trained advisor known as an 02 Guru. During the pre-booked session, the NSPCC-trained 02 Guru can explain how to set up parental controls on phones, tablets and PCs as well as how to make devices safer for a child to use. Appointments for O2 Gurus can be booked in advance on guru.force.com/O2DeskStoreLocator