Put Your Hands in the Dirt 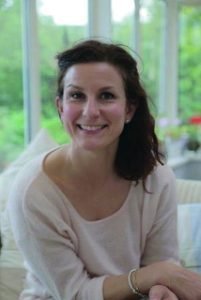 Ten years ago my opinion on gardening was something like this: It’s for ‘old’ people, people with time on their hands and people who aren’t fit enough to do anything else. This Christmas my favourite present was a five-year gardening journal! It’s full of pockets for plant labels, pages for note taking and recording the planting of bulbs, a monthly to-do-list… heaven. I’m now in the habit of inviting green-fingered neighbours over for a coffee in order to surreptitiously gain garden intelligence. So, what’s happened to me in the last ten years that’s turned my scorn into wonderment? Well, it all started with the bees…

My husband began beekeeping three years ago. I passed it of as a middle-aged cry for help, but gradually I became curious about the new inhabitants living in a square box at the bottom of our garden. I’m surrounded by men (even the dogs are male)  and I felt I was betraying my sorority sisters by not, at least, meeting them. I duly squeezed myself into our eldest son’s bee suit and joined my husband and our youngest son on a hive inspection. I felt like an extra on Silent Witness, but still, when the lid was lifted off the hive I had to steady my nerve not to make a run for it. The buzz of up to eighty thousand bees makes a vibration that can be felt. I was sure they could smell my fear. I’d been put in charge of the smoker and my husband told be to pump it over the open frames. The smoke has a calming effect. It disguises the pheromones the bees produce to send each other the signal to attack the strange looking astronaut types poking about in their hive. That was the start. I was hooked on these wondrous vital insects that contribute up to $16 billion to the US economy alone. We need them – everyone should be looking after the planet’s bees.

“We’re meant to live among nature. Without it we will be the ones to suffer most, our physical and mental health will deteriorate in ways we cannot even fathom.”

I buy food the dog likes to eat and produce family favourites for the dinner table, so I wanted to supply our bees with what they need and like, and that’s what took me into the garden. I began noticing which flowers were popular with the bees. I learnt which flowers provide the most nectar in spring when they need a boost after the winter months. It’s not what you might think, dandelions, traditionally considered a weed have nectar with a sugar content that can exceed 40 per cent. That’s rocket fuel for a honey bee. I commandeered a strip of bare land that runs alongside the house and sowed wildflower seeds. I adjusted my thinking to reconsider what was a weed and what was an appealing nectar-flowing flower for a bee. Nature naturally doesn’t always look tidy. It can be unruly, disorderly and sometimes unappealing, but that’s okay. Nature is not supposed to manicured.

Gardening has given me a renewed appreciation for the wonder and resilience of nature. These days my ideal steamy situation is when I turn my compost heap. The heat is a sign that it has reached the optimum composting temperature. It took me a while to get the green / brown mix right so when I did  (YouTube has a fascinating composting community) I was thrilled. I love to peer over my steaming brown mulch in awe at the magic of decomposition. Nature is the Queen of recycling. Given time she has the answer to everything. Unfortunately, these days’ time is undervalued. We all live our lives at top speed. Everything has to be instantaneous and immediate. I love that my new journal has a five-year lifespan. I am not a patient person, but gardening has taught me nature’s cycle cannot be rushed. It has forced me to slow down, to linger and watch for the miniscule changes that take shape day-to-day and week-to-week.

Think about a special memory – where are you? On the beach on holiday, on a mountain top, next a waterfall, beside a field of lush green grass, taking a walk in the woods? We’re supposed to be outside. We were made for outside. We’re meant to live among nature. Without it we will be the ones to suffer most, our physical and mental health will deteriorate in ways we cannot even fathom. It is estimated that two thirds of the global population will live in cities by 2050. Few even realise the need exists to put our hands in the dirt and feel the pulse of the earth in order to appreciate our place within it. The simple act of putting hands in damp soil has been proven to lower the heart-rate and decrease stress levels. Children love to dig, be it in the garden or in a sand-pit; a fingerprint of our foraging hunter-gatherer days. Yet, it’s another natural pleasure we’re in danger of losing, too busy typing and swiping at screens we’re not designed for. Nature shaped us, it’s made the human race what it is and now it needs us to look after it. In 2020 isn’t that the least we can do?

Find more from Natasha at  natashageary.com and follow on social at @GearyNatasha

2020-03-17
Previous Post: St. Patrick’s Day Party
Next Post: Our health and social care system will only be able to cope with Covid-19 if we all rally behind it